We’re proud to announce the latest update to Thousand Wires, a full redesign of the application. Why did we need to redesign it? We think it’s a lot more solid, especially for those of you who want to use it on a mobile device.

The content and the structure are all mostly the same, but the look is a bit more minimal. Removing some of the visual clutter gave us the ability to focus on the things you’re actually doing or want to do with the application. No features were adversely affected, but we think they’re often easier to use.

Along with the redesign came a new mobile interface, one of the key reasons we felt the redesign had to happen. The changes in the mobile view give the application a whole new side. Chances are, when you’re looking at your mobile phone, trying to work with the project, you don’t want to drag the equipment around. It doesn’t make sense. For times when you’re on your mobile device, you probably need to get at your information quickly. You’re probably at a show, and you need to see what is connected to what. 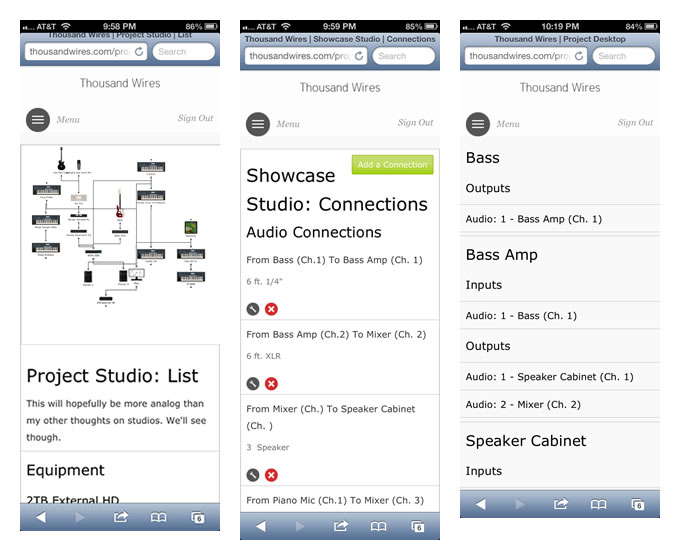 We have a whole new set of features that we’re developing, and with this redesign it frees us up to move quicker on those features. We hope you find the new version more usable, and if you have any questions, comments, or concerns, just let us know!

One of the most important features of Thousand Wires is its ability to let you see your projects in various ways. So, for example, if you’ve just finished your latest album and you’re about ready to hit the road on a tour, you’ll want to see what that would look like in terms of setup and equipment. Until now, you could start a new project, but you had to recreate everything, every time. Today, we released the latest feature, the Item Library.

What is the item library? I’m glad you asked.

The item library is a collection of every piece of equipment from every project you’ve built. When you open it, you’ll see everything in nice rows and columns. When you click an item, we’ll clone that piece of equipment and drop it onto your current project. So if you use any of the same equipment in multiple projects, it’s easy to get a new project up and going in minutes.

Because items are cloned, you don’t have to worry about the original item. That makes it useful in cases where you may have two items of the same type with slightly different features. You can clone the first one, and edit the second in this project only.

This is only phase one of the item library, but we wanted to release it in stages to help speed up the process of creating new projects. Enjoy!

It’s been a whirlwind couple of months since we launched Thousand Wires, and it’s looking like speed may pick up a bit. And that’s a great thing, we think. So, we decided it would be a good idea to start a blog here at ThousandWires.com to cover the latest news and features as they happen.